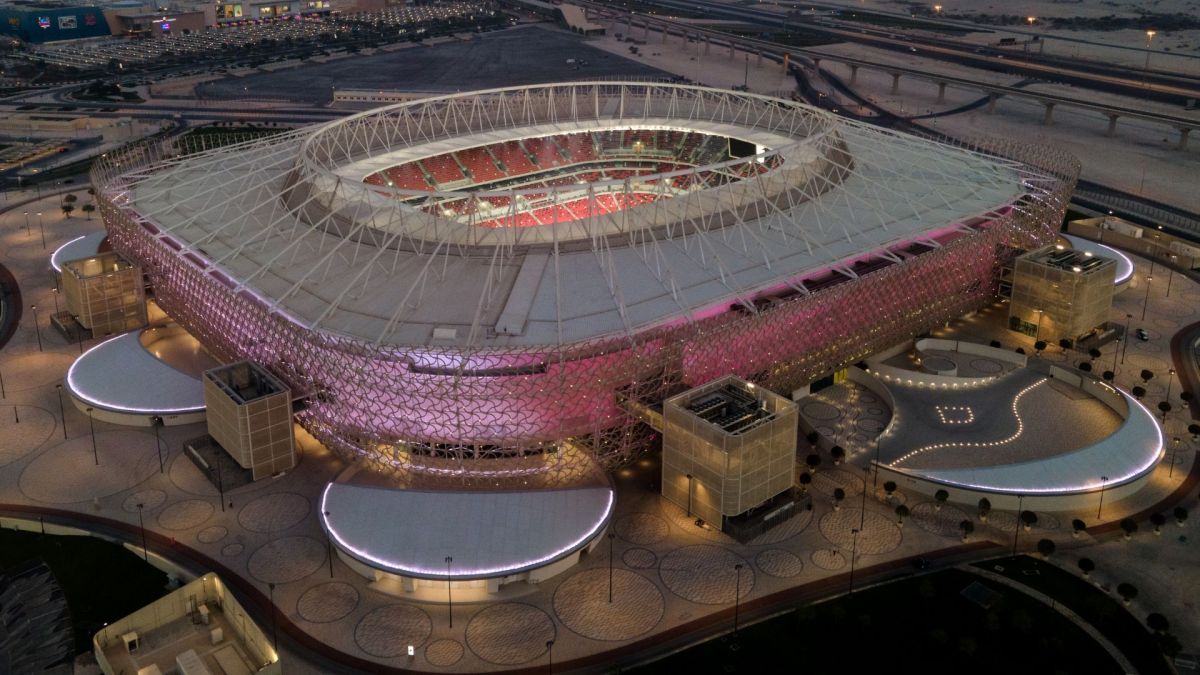 The Gateway to the Desert, Ahmad Bin Ali Stadium

Qatar being the first Middle east country to host the FIFA World Cup, they made sure to prepare well. Since the announcement of their win in the bidding in 2010, Qatar’s government has started making plans for the event and immediately proceeded with the construction. The country and the association built eight stadiums along with several other different infrastructures necessary for the event.

One of these stadiums is Ahmad Bin Ali or more popularly known as Al-Rayyan Stadium. It was formerly a multi-purpose stadium located at Al Rayyan, Qatar hence its name. Even though it was multi-purpose, it mostly hosted football games and is the home of Al-Rayyan sports club and Al-Kharitiyath Sports Club. Its current name was after the Emir of Qatar from 1960 to 1972, Ahmad bin Ali Al Thani.

However, it was demolished in 2015 to give way for the construction of the newer and bigger stadium. From the capacity of 21, 282 seats, the Ahmad Bin Ali stadium now has 44, 740 seats for the 2022 Qatar FIFA World Cup fans. Further, it is often referred to as the gateway to the desert due to its location. Although a bit farther, it is still very accessible from the capital through the nearby Al Riffa underground station.

There were several designs where the stadium’s design was based on. Firstly, it is inspired by sand-dunes since the stadium is sitting at the edge of the desert. Second, it resonates the traditional Qatari facade. Pattern Design did the concept. It combines a simple compact body and a stylish facade through a light mesh and roof based on a steel ring.

Through that, the building’s visual became more unique and attractive. Initially, the roof design was suggested to be four traditional trusses which will be anchored in each corner. However, this idea was later scrapped. One of the most distinct element in the stadium is its 39, 000 square meter illuminated facade. It is consist of multimedia screens covered by a translucent metal screen.

Since all the stadiums has an Islam culture, tradition, or anything related to Islam attached to it, Ahmad Bin Ali has one too. The metal screens display family values, the desert’s beauty, flora and fauna, local and international trade. The shield element links all of these and symbolizes strength and unity. Just like the other seven stadiums, Ahmad Bin Ali stadium is also sustainable.

It uses solar panels in the roof for the daily maintenance of the building. It also uses an environmentally friendly cooling technology through a central station that has a capacity of 16, 000 tonnes. This also supplies the chilled water throughout the stadium. There are also air treatment units which are deployed to provide the temperature required in the stand and pitch area. All in all, the stadium is 20% more energy efficient and is using 20% less water compared to other stadiums.

The Ahmad Bin Ali stadium was built at the same place where the Al Rayyan stadium formerly stood. Originally, Al Rayyan was supposed to be used for the FIFA World Cup 2022. It was only a seven year old stadium then. The government were just planning to add 20, 000 temporary seats to the already built stadium. However, in 2014 a decision was made completely different from the first one.

The association and the government decided that it is more advantageous to fully demolish the stadium and rebuild it. Items which were fully functional after demolition were donated to other venues or for art projects. The demolition of the stands started in 2014 and lasted for six months. Crushed concrete were then used as a building material for the new stadium. The construction of the new stadium took place in 2016 which was a joint project of Al-Balagh and Larsen & Toubro, while the design was done by Pattern Design.

The stadium was then inaugurated in December 18, 2020 during Qatar’s National Day. Further, just like the other infrastructures made for the 2022 FIFA World Cup, Ahmad Bin Ali stadium was also in the light of the controversy of having 6,500 immigrant worker die due to improper management, as well as the low wage which were given to the same. Although denied by both the government and association, no definite answers were still provided.

The gateway to the desert, or Ahmad Bin Ali stadium was built to fit the 40,000+ capacity required by the association. However, it was said that after the 2022 Qatar FIFA World Cup, the capacity will be reduced from 44, 740 to 21, 000 seats. The other 20, 000 seats will be donated to other countries to support the infrastructures built for the next world cup.

It will then be a home to the Al Rayyan Sports Club, Qatar’s most popular sports team. More so, its running and cycling track, six football pitches, tennis courts, and cricket pitches can be utilized as a sports facility for sporting events in Qatar in the near future.